The second Major of 2018 has been won by Germany’s Marcus Ehning riding Pret A Tout, producing three exceptional clear rounds in the highlight of CHIO Aachen, the Rolex Grand Prix. Second place went to Luciana Diniz (POR) riding Fit For Fun 13 and third place to Pedro Veniss (BRA) riding Quabri De l’Isle.
The sun streamed through the clouds to light up the main arena, as 40,000 passionate equestrian fans waited for the world’s top international riders to contend for the second Major of the year in the Rolex Grand Slam of Show Jumping. Highly respected course designer of 40 years, Frank Rothenberger, assembled an impressive first round with 13 obstacles, reaching up to 1.70 metres. Rothenberger commented:

It’s a very tough course this year, there will be two rounds with a tricky jump-off too, we have built a course almost to the maximum that we can build, so it should be very interesting”,

The towering course appeared intimidating, and one capacity height jump certainly proved too challenging for some, however, the roster of riders tackled the course with confidence, power and determination. This thrilling round resulted in 11 clears, and 18 pairs moved into round two with an enraptured crowd looking on.

Successful riders included Rolex Testimonees, Steve Guerdat (SUI) and Eric Lamaze (CAN), who both produced daring rounds to secure their places. Despite a valiant effort on her young bay, Calle 67, Rolex Testimonee Meredith Michaels-Beerbaum finished with ten faults and was unable to progress further. Niels Bruynseels, the live contender going into the Grand Prix suffered a similar fate and with two rails down, saw his journey come to an end.

Anticipation mounted in the crowd, ahead of the second round, and as the wind picked up around the arena so did the pace. The riders now faced a revised course of 12 obstacles and 15 jumping efforts, including an imposing triple combination situated in the far corner of the world-famous arena. The horse and rider pairings had found their stride and clears seemed easier to come by, with a total of eight at the end of the second round. However, only five were able to produce a double clear to take them into the jump-off in this captivating competition. 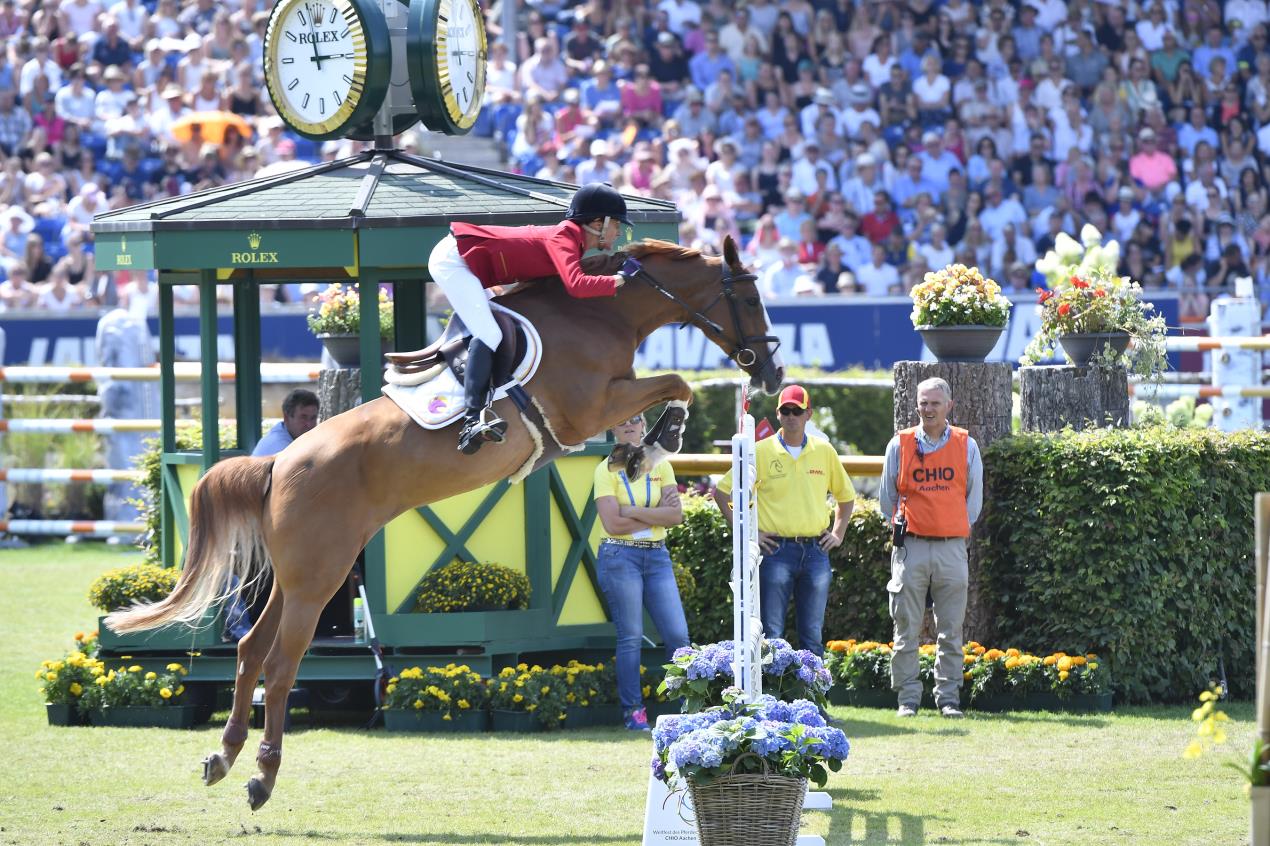 Veniss headed straight to the top of the leader board after he made his way steadily around the course. Cheered on by the patriotic home crowd, Germany’s Marcus Ehning sailed around the ring and into the jump-off. Despite fearless riding, Rolex Testimonee Eric Lamaze had two fences down, including the last Rolex obstacle after gently clipping the top. Rolex Testimonee Steve Guerdat demonstrated his confidence and experience as he produced another fantastic clear aboard Bianca. Joining Ehning and Guerdat was Ireland’s Darragh Kenny and Portugal’s Luciana Diniz, who was looking to better her second place in the Rolex Grand Prix for the last two years.

The course was re-built for the third and final round, the jump-off. First to go was Veniss, who proceeded to emulate his last two rounds and produce a swift clear. Luck was not on the side of Guerdat and Kenny, as they left the famed Aachen arena with 12 faults each. Emotions were running high in the crowd, and Marcus Ehning rode out to a stampede of applause. After coming second in the Rolex Grand Prix at The Dutch Masters, the first Major of the year, the patriotic home crowd were longing for him to go one step further. Ehning flew around the course in a time of 38.34 seconds and the crowd erupted to celebrate his third stunning clear round. Diniz also went clear with the fantastic support of the crowd but was unable to beat the winning time, giving Ehning the Rolex Grand Prix title.
Champion of the Rolex Grand Prix at CHIO Aachen for the second time, Ehning remarked:

I think I like it here now. This is the best show in the world and the course was huge, but I think it was very good. My horse gave me a lot of confidence, it was his day today.”

For Marcus, his Grand Slam journey has started, he will now be able to continue it at Spruce Meadows. I would like to say a special thanks to Rolex for their support in this Grand Prix, this is the 18th Rolex Grand Prix we have hosted here, and it creates such a spectacular atmosphere.”

Eager equestrian fans will now be looking to the next equestrian Major at the CSIO Spruce Meadows ‘Masters’ in September, where Ehning will now have the chance to emulate his thrilling performance today and continue his reign as the live contender of the Rolex Grand Slam of Show Jumping.

This website uses cookies to improve your experience while you navigate through the website. Out of these, the cookies that are categorized as necessary are stored on your browser as they are essential for the working of basic functionalities of the website. We also use third-party cookies that help us analyze and understand how you use this website. These cookies will be stored in your browser only with your consent. You also have the option to opt-out of these cookies. But opting out of some of these cookies may affect your browsing experience.
Necessary Always Enabled
Necessary cookies are absolutely essential for the website to function properly. These cookies ensure basic functionalities and security features of the website, anonymously.
Functional
Functional cookies help to perform certain functionalities like sharing the content of the website on social media platforms, collect feedbacks, and other third-party features.
Performance
Performance cookies are used to understand and analyze the key performance indexes of the website which helps in delivering a better user experience for the visitors.
Analytics
Analytical cookies are used to understand how visitors interact with the website. These cookies help provide information on metrics the number of visitors, bounce rate, traffic source, etc.
Advertisement
Advertisement cookies are used to provide visitors with relevant ads and marketing campaigns. These cookies track visitors across websites and collect information to provide customized ads.
Others
Other uncategorized cookies are those that are being analyzed and have not been classified into a category as yet.
SAVE & ACCEPT