Niels Bruynseels (BEL) and his speedy mare Gancia de Muze reinforced the Belgian march on the Championship after a dazzling win in a star-studded jump off in Cannes.

Scott Brash, who finished in 2nd place riding Hello Mr President said: “Neils was too fast I couldn’t catch him. I was delighted with how Mr President jumped, he saved his best till last I should have been able to get the 8 strides to the last but even if I did I still don’t think I would have won. I can’t complain I just need to try ride faster! [joking] It was a bit inconvenient of Niels not to have already qualified for the [LGCT Super Grand Prix] but if he keeps jumping like that he should [pass on another place to the LGCT Super Grand Prix].”

Germany’s Daniel Deusser, who finished second in the Cannes Grand Prix, and Belgium’s Pieter Devos remain locked in an intense duel at the top of the Longines Global Champions Tour overall ranking separated by only 12 points after the 7th leg of the 2019 season. 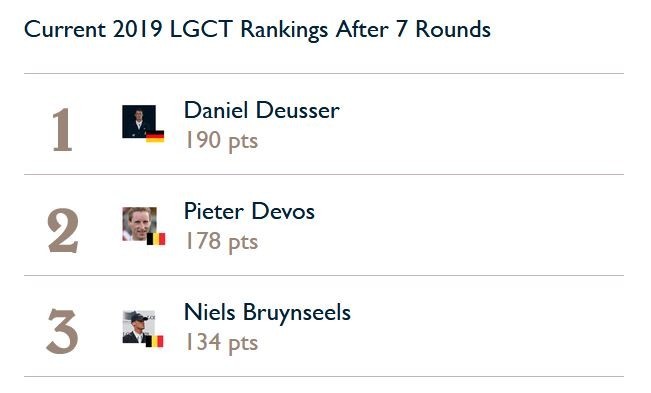 I have no words! To win a GP like this means a lot to me. I have to thank my horse. One of the best horses I have had in my life.” Speaking of his qualification to the LGCT Super Grand Prix at the GC Playoffs in Prague later this year he added: “This is something really special, to get something like this in your career is great. I saw the round of Daniel and knew he was very fast. I know I have a super fast horse and when I do the same lines as the others she is just faster.”

The Longines Global Champions Tour Grand Prix of Cannes Presented by Volvo got underway under floodlights in the square sand arena next to the Mediterranean. The grandstand and hospital lounges were full to bursting for a night of high octane show jumping.

It was night of extraordinary displays of speed and knife edge precision as the big guns of show jumping delighted fans around the world.

The world’s best riders faced 13 obstacles with verticals at the full 1.60m height and serious challenges at the Longines triple combination and a sprinkling of fragile uprights as course designer Gregory Bodo set out to test the best.

The Tour now looks to the first of three new stops for 2019, Stockholm, Sweden, for the 8th leg on the Championship race.