This month, David has had a busy time since his last blog, including Pony club Area competitions, passing an important exam and an amazing time at Barbury International Horse Trials…

On the 16th of June I travelled to Warwickshire College to sit the prestigious British Horse Society Senior Equitation Exam. Finished at 12 noon, as one of only two candidates, I certainly felt that I had been put through my paces. Essentially you get given lots of strange horses, of all ages and stages, to ride on the flat, show jumping and cross country then lunge one horse and you are done. There is lots of discussion about each horse, its’ standard and progression, but since I love to ride I had a great time and would happily have done a whole day! I had a really good feeling as I said thank you to the assessors and made my way home. My positivity was well founded as nine days later the certificate arrived and I am now a BHSII, SE (Senior Equitation)! To complete the entire BHSI I must take a coaching and stable management exam, but that is for next year.

Saturday 25th June was Pony Club Area 12 Show Jumping at Addington Manor, where in my official role as team trainer for Hughenden Pony Club I took great pleasure in walking the courses with the riders before helping them to warm up and of course offering help, praise and encouragement before during and after their rounds. Area competitions, as preparation for the National Championships are always stiff, and I was thrilled at how my riders rose to the occasion. I was watching and cheering on vast numbers of other riders too as I teach for many different Pony Clubs.

The following Monday I took Sir Gawain (17hh 6yrs by Lancelot and for sale) to Wheatlands Farm for his first ever cross country schooling. The selection of jumps from tiny to decent metre fences made Gawain’s understanding of cross-country very easy and so he flourished throughout the session finishing very happily having jumped everything I asked including combinations, water and ditches.

Two days later Gawain travelled to Bury Farm to jump his first BS British Novice which he popped round double clear very confidently and without really losing his balance, so I was very impressed with him. You know a horse has huge talent when you have to prop yourself on his neck occasionally!

Towards the end of the week I took Continuity (Brad) and Newmiln Jamestown (James) to use the water treadmill at Priory Farm   https://www.horserehab.co.uk/ . Brad uses the treadmill regularly to encourage him to move in a very loose, natural and elastic way. I feel this gives him an extra edge in all his work as he feels confident to really stride out and be forward. It was James first time but he was fascinated and un-flustered. Mind you, I never see that length of stride off the treadmill!

5th July I travelled to West Wilts Equestrian Centre to take part in a Mark Todd BE Bridging the Gap training day with Gill Watson, Lizzel Winter and Sir Mark Todd. I was able to run through my 2* test for Barbury with Gill where she improved my serpentine layout and quality and the angle in my shoulder in. Proof was the 8 I got for one of my serpentines in competition later that week with the comment “very good floor plan”.  Brad stayed overnight at West Wilts, the following day we travelled to Barbury International Horse Trials in Wiltshire and he was the first horse to arrive in the stables! 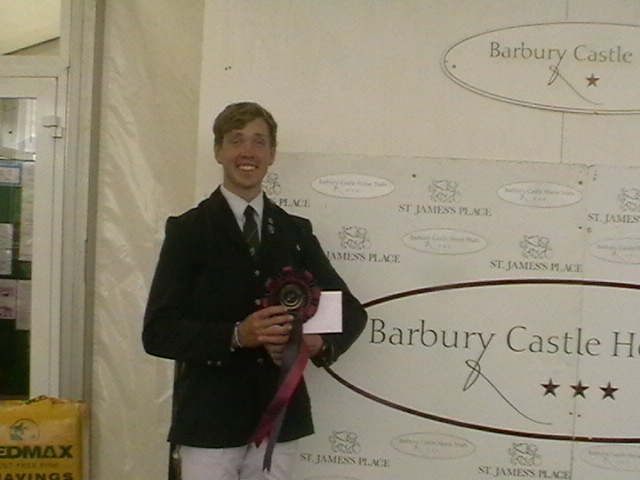 Wednesday was spent grazing Brad, cycling the course, hacking and stretching Brad, then more grazing………..  A bit of a holiday really. Looking at my section list was interesting with large numbers of Rio bound horses having a final tune-up!

Dressage day, pretty much went to plan. Brad seemed much more tractable and settled than usual in the working in. Normally he will spook and shoot in the opposite direction if another horse comes too close. I think his relaxed attitude was a combination of staying away from home for a couple of nights and the fact that we have developed a solid system for getting him to wee before he is tacked up so that he is not uncomfortable and thinking of other things! We scored a 50.5 which put him 16th out of 93 in CIC2* section C after the dressage. My trot work needed more lift, swing and cadence to have achieved a better mark but I think I was so relieved not to have a repeat of the disastrous test at Nunney International last time out that I didn’t push my luck!

Show jumping (which was erratic last year) was clear over a twisty and undulating course that caused many faults throughout the day. Mum was so relieved and thrilled that she did her “Whoop” sound affect then her ”cry a little” routine. Thanks to friend and Supergroom Moi for calming her down!

And the main event? The awesome bit that makes my heart sing? Cross country was epic with the direct routes, splashes and all. Brad and I know each other so well I just nestle in behind him, steer and stay out of his way to allow him to make the time comfortably at this level.

We were amazed and thrilled to finish 3rd in such a huge, high class section with first place going to the legend that is William Fox-Pitt who will shortly contest another Olympics in Rio. Interestingly the prize giving was very sparsely attended which I thought a pity. This is becoming increasingly common and in my opinion does not show full respect for the organisers and sponsors. I know many riders at all competitions have multiple horses and may well be in the saddle at that moment but they surely have owners, friends or grooms who could attend?

I groomed and drove for my sister, Roxanne, who competed her own Barrettstown Derby (Derby) at Eridge BE100. It was our first visit and the hilly, testing course caused some horses to finish very tired as it was soooooo hot! The show jumping was unusually influential and I was proud that she finished 11th.

Pony Club Area 12 Eventing at Offchurch Bury, site of a new BE Horse Trials, was a very educational day for my riders from Flamstead Pony Club. They were competing at a new level to Pony Club, the Grassroots, which has cross country at 80cm. All riders had a sub-34 dressage, clear show jumping and then some minor issues that did not ruin their fun across the country. All completed with a grins on their faces for having represented their Club at Areas.

So where next? Brad and I will run at Aston Le Walls in our second Advanced, which will also be my first and last Advanced Under 25 competition and then….drum roll…..we have entered the CIC3* at Hartpury International where last year we missed out on a top ten placing at CCI2* because of those pesky show jumps!

I will now be competing a new ride Master Rowan, owned by Kathy, alongside Sir Gawain. As Roxanne is running her two we have plans for running 4 horses in one day for the first time.  I am still looking for more rides though…………..Exciting! I am also delighted to report that I am also now a Brand Ambassador for WOW Saddles!

If you should see Team Britnell and our lorry “Patsy” about anywhere do say “Hi” and join us for coffee and cake?

Have fun and crack on!