Saturday at the Land Rover Blair Castle International Horse Trials was action packed. There were nine hours of CCI3*, CCI2* and CCI1* cross-country, CIC3* show jumping and cross-country, and ERM dressage, all of which took place in nigh on perfect conditions.

While Oliver Townend had dominated yesterday’s dressage phase to hold first, second, third, sixth and twelfth places, it was all change by the end of the showjumping. This was not due to a sudden change in Oliver’s form, but because Cooley Master Class, Cooley SRS, Ballaghmor Class and MHS King Joules were all withdrawn after the showjumping phase, as pre-planned with Land Rover Burghley taking place next week.

The showjumping caused its share of problems. At the end of that phase Oliver remained in first, second, sixth and seventh, with Tregilder in ninth. Piggy French, Bella Innes Ker and Ben Hobday all jumped clear so, with Oliver’s withdrawals, these were the leading riders heading out across country.

The optimum time was to prove very influential. At first it looked as though Storm Straker would post the fastest time, coming home 10 seconds over the optimum for four penalties – a result which moved her up from 14th to fifth. Arthur Duffort and Piggy French both collected 7.2 penalties, Arthur soaring up from 36th after dressage to eventual sixth, helped by a clear showjumping round, while Piggy looked certain to take the win.

However, never underestimate Oliver Townend. The penultimate combination on course flew round the track, making nothing of the challenge in what was Tregilder’s first run at three star. They crossed the finish line six seconds inside the optimum time to take the win.

He’s unbelievable – he’s in a different league gallop wise. I absolutely didn’t expect to win, but he’s so professional. He lets me help him when he needs it, but knows exactly where his legs are. I couldn’t believe it when I crossed the line and saw the time. I’m delighted for his owners the Hazeldines, and it’s also a great advert for Preci Spark who bred him.”

He’s a cool horse and Kevin McNab has done a great job of producing him – but I think always ran him quite slowly. I feel that running him fast makes him braver.”

I went as fast as I could; I said go, and he did. I’m really hungry to win one of these three-stars and I think he’s got it in him.”

The optimum time proved influential in the CCI3* with just four combinations making it, including Elizabeth Power and Samuel Thomas who were one of several to pick up 20 penalties around the track.

The top three remained unchanged after dressage and were the only three to finish cross-country day on their dressage scores. In-form Tom McEwen, last out on track with Strike Smartly, still heads the leader board on a two-phase score of 26.9.

“He was absolutely phenomenal. He was straight as a die and cruised round. There were a lot of questions out there and he really helped me out at the road bridge going into the Lochan as I was a bit off there.”

said Tom after his round

Izzy Taylor posted a trademark swift round with Director General, a horse having its first run at this level, and sits less than a penalty behind the leaders, leaving them no room for error in the final phase. New Zealand’s Tim Price also posted a very classy clear round bang on the optimum time with Pats Jester to lie third.

While several combinations picked up penalties at various points around Alec Lochore’s track, Arthur Duffort and Toronto D’Aurois’ 0.8 time penalties elevated them up the leader board from 24th after dressage to ninth. 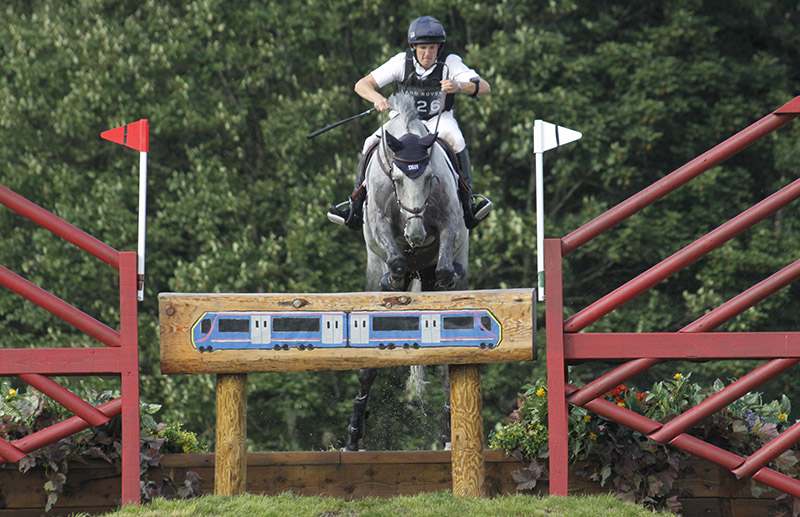 Tom McEwen also remains in contention in the CCI2*. His clear round inside the time with CHF Cooliser, aka Eliza, keeps the pressure on overnight leaders Piggy French and Cooley Monsoon going into Sunday’s final show jumping phase. The pair go forward on a two-phase score of 28.7, less than a show jump behind Piggy and ‘Eddie’ on 25.1.

“She was super, I was a bit worried that Gatcombe a couple of weeks ago would have taken it out of her a bit as she’s still young and needs to strengthen up, but not at all. This was a very different test for her – she hasn’t seen water as big as this before or as many crowds around water, but she coped really well.”

Piggy and Eddie also added nothing to their dressage score, coming home six seconds inside the optimum time.

He covers the ground well but I have to work hard to keep his adrenalin up. He’d be quite happy to cruise around in second or third gear having a lovely time.”

Said Piggy. She was complimentary about the track and the role it plays in horses’ educations:

Blair has good, old-fashioned cross-country tracks and today (Saturday) was a good bridge between Eddie’s last 2* at Tattersalls and what our plans are for him next.”

Matthew Heath and Lockroy retain the fourth place they held after dressage, with Emilie Chandler occupying fifth and sixth places on Jemilla and Gortfadden Diamond respectively.

The track generally rode well; the biggest casualties in terms of leader board placing being Polly Stockton and Drummer who slipped from third to 26th after collecting 20 penalties at 20b, the second of two corners.

The business end of the leader board after cross-country remained largely unchanged from how it looked after dressage. New Zealand’s James Avery and the Scottish-bred Seaflower retained the lead they have held since Thursday, coming home clear inside the time. They go forward to the final show jumping phase on 25.2.

She was just super”

She’s still pretty inexperienced and that was certainly the biggest track she’s seen so she had a good look at everything – particularly the ditches. She’s never run across country for nine minutes before but she just kept on coming. She’s usually a reliable show jumper so I’m quietly confident but we’ll see how tired she is.”

Aimee Penny and Serenade III retain second place on their dressage score of 28.3.

She came out of the start box like a rocket and answered all the questions. I was most worried about her stamina but she’ll have come on a hell of a lot here and learnt to have dug deep.”

Nicola Wilson is sitting pretty in third, fourth and sixth with the young trio of Elite Jaguar, JL Dublin and All We Need.

The vast majority of combinations came home inside the optimum time of nine minutes in what, for many, was their first CCI competition. There’s still all to play for in the show jumping phase which starts at 11.40am with less than one fence between the top five competitors. 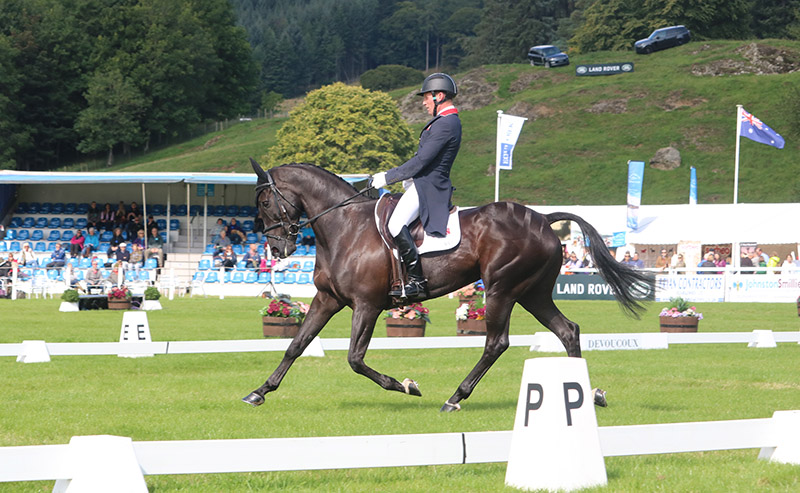 Having filled the top three placings in the CIC3* dressage yesterday, Oliver Townend’s domination continued in the Event Rider Masters class. He rode in to the top spot on short format specialist Cillnabradden Evo, on whom he won here at Blair two years ago.

“It felt pretty disasterous to be honest,”

but it’s good to still come out on top. Cillnabradden Evo is feeling very well and ‘bright’, which is good for some bits of the competition but not necessarily the dressage!”

With Oliver on a score of 26.4, Christopher Burton – the current ERM series leader – and Graf Liberty are just half a penalty off the pace. Delighted with their test, Chris admitted that that his ride is not the best showjumper but: “the cross country phase should be OK, despite the promised rain.”

Emily King and Dargun complete the top three with a score of 27.1 going into the showjumping.

Looking ahead the cross country phase, Oliver believes that the course will be influential – particularly if the forecast rain materialises.

There are a couple of fences out there, such as the hanging log to double of angles hedges [15&16] that are more championship than CIC3* fences. It will be interesting to see how the horses read the questions.”

The course is a bit different this year. The designer has gone for slightly short distances in places – last year they were slightly long. I think he is trying to slow us all down a bit. There are definitely a few fences that could cause a problem.”