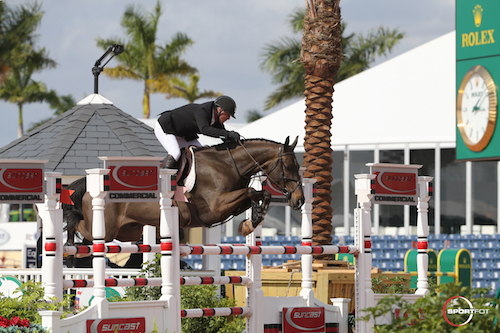 Wayfarer, an 11-year-old gelding (Languster x Lancer II), was born and raised at Leone’s Lionshare Farm in Greenwich, CT. In 2012, the gelding won the Six-Year-Old Young Jumper Final at 2017 Winter Equestrian Festival and has since developed into a top horse for the rider.

“He is a big-strided horse,” Leone described. “In the jump-off, I tried to take advantage of my horse’s big stride. I kept him a little fresh coming into today. That is when he jumps his best. He really felt in good form.” 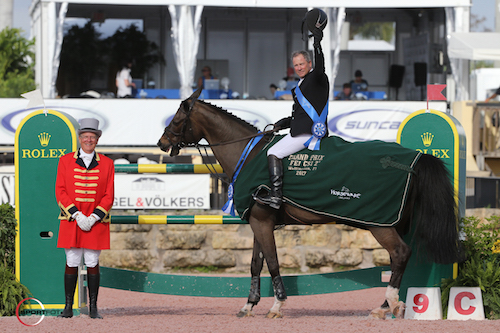 Leone continued, “The first round, I only got to watch a little bit because one of the wonderful things, but also challenging things about being at the Winter Equestrian Festival, is that many of us have students that are jumping in other rings. Right after the course walk, I went and put a wonderful rider in the Low Junior Jumpers. Then I came back and watched a couple and did my first round. Then I ran back to go do another great student of mine that went into the lead in the High Children’s Jumpers. Then I came back just in time to jump on and give it a go in the jump-off.” 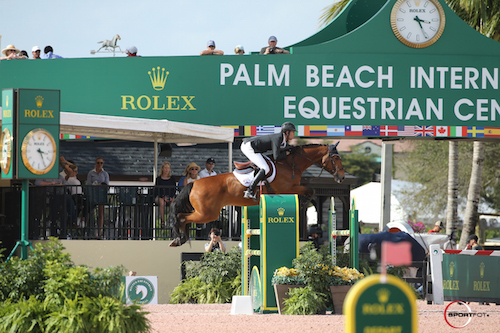 Second place finisher Jonathon Millar was also pleased with the opportunity to jump in the two-star division this week with his young mount Daveau, a nine-year-old Dutch Warmblood gelding (Zento x Glennridge).

“We bought him as a seven-year-old,” Millar detailed. “He is a quick horse. For being a big horse, he is pretty handy. He is very smooth, and I think that is what makes him quite quick. Plus, he is smart. If I ask him to turn, or I ask him to go on an angle, he knows where we are going” 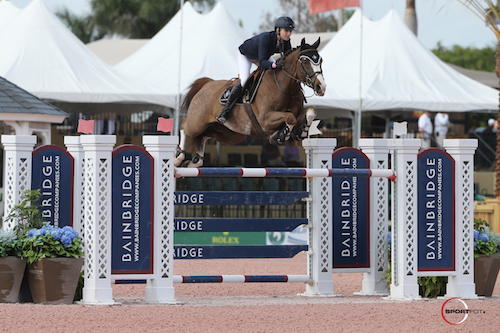 Abigail McArdle was aboard a veteran mount in her horse Cade, a 15-year-old Belgian Warmblood gelding (Heartbreaker x Darco) that she has owned for five years.

“We retired him last year, and then we brought him back this year,” McArdle noted. “He had a little over a year off. Our philosophy is if they are sound, they keep going. There is nothing like nature and time that gives a horse its way back into the ring”

Sunday’s $86,000 Suncast® 1.50m Championship Jumper Classic featured 50 starters over another Anthony D’Ambrosio (USA) designed course, with a ten-horse jump-off. Chile’s Samuel Parot raced through the short course in 38 seconds flat for the win aboard his own Quick du Pottier. 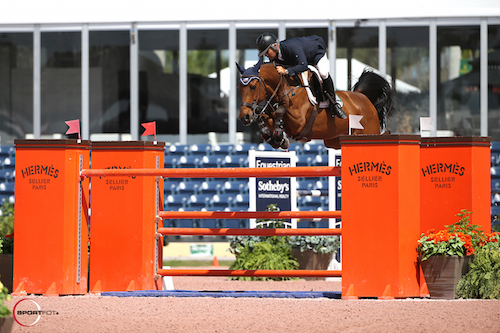 Parot and his 13-year-old Selle Francais gelding (Hurlevent De Breka x Cuba) have been partnered since 2014 and share a mutual appreciation for speed.

“This horse is really fast. He jumped a very good first round, and in the jump-off I tried to win,” Parot stated. “I went very fast, and I took a lot of risk at the last jump. He is very careful. He jumps a lot of clear rounds, and he did not touch anything today.”

Parot continued, “He won a few classes last season, and it feels very good to be having such a great circuit. For him to make the jump-off is not difficult. He is always very fast.” 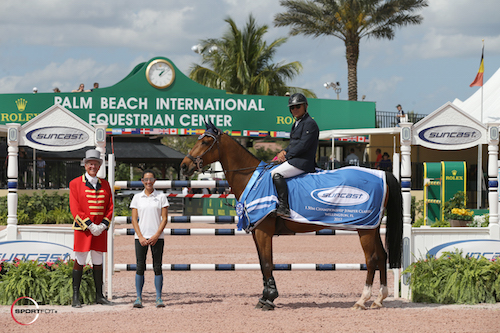 While Quick du Pottier’s ability and enthusiasm make him a winning horse in the show ring, the gelding needs to be well-managed at home and in the warm-up ring.

“He is very hot,” Parot explained. “I do not jump him much at home, and it is not possible to jump him here in the warm-up. I do one jump and then go. He is a really special horse.”

A field of 31 riders competed for the top honors in the THIS Children’s Medal 15-17 on Sunday morning, but it was Erika Luter of Palm Beach, FL, who rode her own Cris Van De Helle to the win. The medal consisted of a first round and a final test that brought back the top four riders in reverse order. The test consisted of a hand gallop, which proved to be the most difficult portion of the test, a halt, a counter canter, and a rollback to an in-and-out. 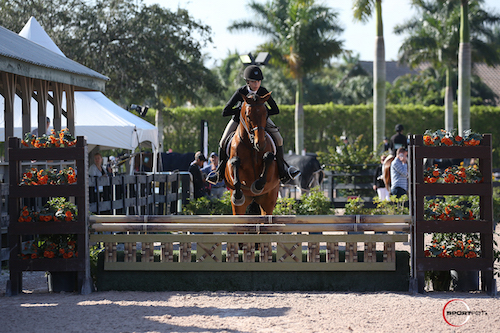 Speaking of her test and first round, Luter said, “I haven’t really practiced that many hand gallop jumps, so that part was a little risky. I was nervous about it, but he took care of me there and the rest went really well! The first round course was nice. The bending line was a long seven strides, which was challenging, but once I got my pace going it ended up really nicely.”

Luter purchased the 11-year-old Holsteiner gelding by Cristo two months ago and recently started showing him in the 3’6″ equitation classes.

“He’s one of the best horses I’ve ever had,” Luter explained. “He makes my job very easy and is so loveable and kind. I just started competing in the big equitation classes, so my main goal for the winter circuit is to be successful and consistent in those rounds.” 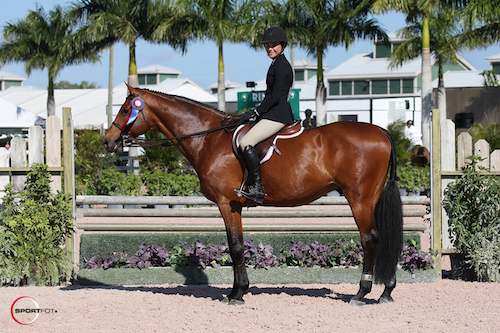 Melanie Dunton of Warrington, PA, and her own Antero moved up from the fourth place position after the test to finish in second place. Antero is a 2005 Oldenburg gelding by Abke. The third place ribbon went to Samantha Weinerman of Chester, NJ, and her own Encantada. Weinerman also shows her eight-year-old mare in the Children’s Hunter 15-17 division. Hailey Link, of Irvine, CA, and her Barolo W placed fourth.

The Winter Equestrian Festival continues in its eighth week of competition on March 1-5, 2017. For more information and full results, please visit www.PBIEC.com.