A Derbyshire man has been given a lifetime ban from keeping equines after he left five ponies confined in damp, dark shipping containers with little or no access to fresh air, turnout or food.

Anthony Melland (DOB 01/12/1970), of Ashbourne Road, Flagg kept two Shetland ponies, Robin and Allana, in a plastic container which had once formed the body of a van and two other ponies, Vienna and Kiara, plus a young foal, Victor, in a metal shipping container with no windows or ventilation. World Horse Welfare Field Officer Rachel Andrews worked in partnership with the RSPCA, and the ponies were seized under the Animal Welfare Act in February 2016.

Rachel said:
“The containers were dark and damp with no clean bedding and nowhere dry for the ponies to lie down to rest. There was some food available but it was mouldy and one of the Shetlands, Robin, was in a very poor state. The young foal had some conformation problems which had not been addressed and also an untreated wound.

“Shipping containers are not somewhere that any animal should ever be housed, even on a temporary basis and the terrible conditions these ponies were forced to endure were completely unacceptable. Considering that the farm is on the side of a busy main road, the ponies were invisible to anyone passing by as dark containers are the last place you’d expect to find them.

“The ponies were all taken to the safety of World Horse Welfare’s Penny Farm Rescue and Rehoming Centre where they received the care they so desperately needed.” 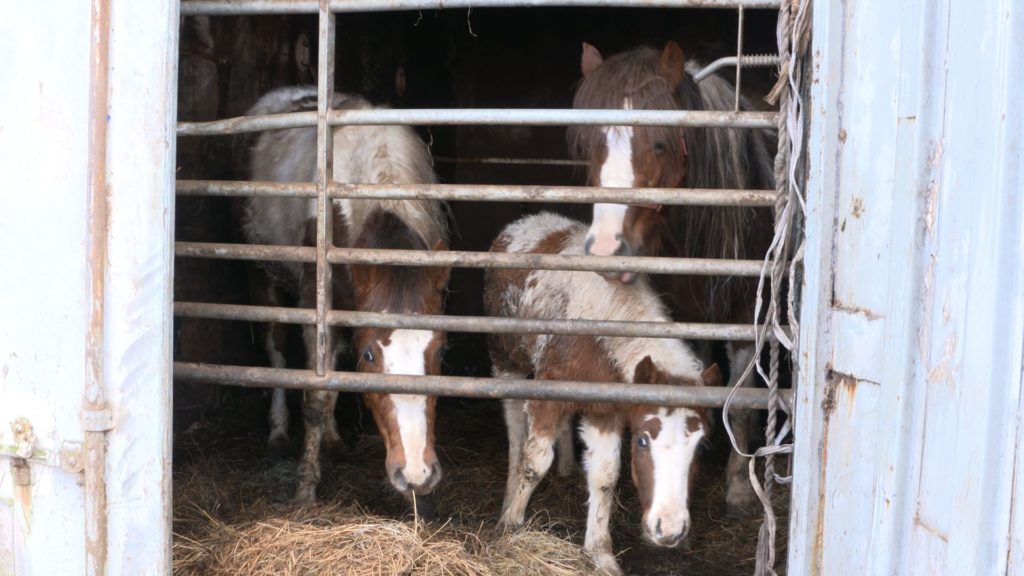 Allana has now found a loving new home through World Horse Welfare’s Rehoming Scheme and Victor, Vienna and Kiara are continuing their rehabilitation. Sadly, Robin was found to be suffering from severe dental problems and a sinus infection which did not respond to treatment so he was put to sleep a few weeks after arriving at Penny Farm.
Rachel continued:
“Seeing the ponies out enjoying the fresh air and freedom in the fields at Penny Farm is absolutely fantastic and I am so pleased that they now have the chance of the life they deserve. Locked away in the containers, these ponies could have remained hidden from view until it was too late but thankfully they are no longer invisible.”

RSPCA Inspector Heather Morris investigated the case. She said:
“It was absolutely appalling that the animals were shut away in these horrific conditions. The containers were humid and absolutely stunk. For them to be locked away with no fresh air is absolutely horrendous.”

Anthony Melland was given a six-week prison sentence suspended for 12 months, ordered to do 150 hours of unpaid work and pay £400 costs, as well as a lifetime disqualification on keeping horses. Magistrates gave Janet Melland a 16-week curfew, ordered her to pay £400 costs and also disqualified her from keeping horses for life.

The RSPCA worked with World Horse Welfare, Derbyshire Police and the local Trading Standards on this prosecution.