So, Continuity is now on a well earned holiday after a magical season together culminating in a very special tenth place in our fIrst ever FEI CIC3* at Hartpury International. Outings with the other horses have also been very productive. At Solihull back in August I had a super outing Sir Gawain at BE90 which he found very educational as it was a very twisty track compared to his previous runs, with a good variety of fence types, so home clear and no penalties was lovely. Master Rowan, in our first Novice together, gave me a more connected feeling in the dressage but he caught me out in the show jumping as he didn’t really spark up like the last outings so a few poles were taken. No worries though, because the most important part was clear and inside the time round a track that caused enough problems.

Overall a good weekend for both horses and achieving a top 10 finish on Master Rowan was a bonus! A couple of weekends later I ran at Goring in the BE90 class on the first day with Gawain. A lovely test in pouring rain didn’t quite achieve the scored I had hoped for, his clear over the Show Jumps was very confident and careful. Cross country with the hammering rain on the hard ground caused the conditions to become rather slippery and only 4 fences from home Gawain lost his footing whilst turning resulting in him sliding onto his side. Technical elimination was not planned but that’s the way it goes sometimes, we were both fine and no harm done.

The next day for the Intermediate Novice on Master Rowan was sunny and dry which he seemed to appreciate giving me a better ride again in the dressage, we both worked together a lot more over the Show Jumps tickling just two down. Then cross-country was awesome with a fab clear inside the time. Jumping the last corner, hedge, corner on three and four strides was like being on train tracks, we loved it!

Next outing was to Blenheim on the Friday to coach for Hughenden and Herts Hunt Pony Clubs in the Eventer Challenge where all the riders did a great job representing their clubs in a busy and lively atmosphere. 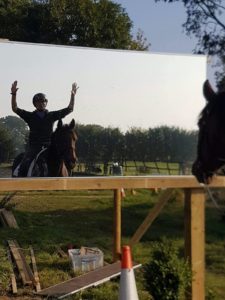 With the help of Charlie Fox and his tractor we now have almost finished putting up our mirrors on the short side of the arena. These 6, 8×4 foot mirrors, have been sat in the barn for at least 2 years since my Mum’s notable birthday, but after a lot of digging, measuring, sawing, screwing and lifting we are almost there. It is great that they are finally up and I can now tweak and improve the horses’ way of going with full clarity!

I am preparing Master Rowan for our first FEI1* together at South of England this weekend and Sir Gawain and Barrettstown Derby will conclude their season with runs at Calmsden.

A slightly shorter blog than the last couple but it’s that time of the year as the season is almost up. Now I am planning for next year and dreaming of Blenheim CCI3*………….