Leon Melchior, founder of the world-renowed Zangersheide Stud, has passed away at the age of 88, at home with his family in Lanaken (BEL).

The business world remembers Leon Melchior as a dynamic and successful entrepreneur. In the world of equestrian sports, he was a pioneer and one of the first to turn the breeding of Jumping horses into a science.

An enterprise that began as a Jumping stables in the 1970s was transformed by Leon Melchior into a breeding farm that eventually became the Zangersheide Stud. Attention to detail and objective assessment of results were key to the success of the Zangersheide venture. He always surrounded himself with experts that could deliver his vision, leading to the consistent production of classically bred, top-class equine athletes with the trademark Z for the Zangersheide Studbook.

Trained by Johan Heins during his international Jumping career, Leon Melchior competed on many Nations Cup teams for The Netherlands. He also organised the Belgian CSIO at Zangersheide for a number of years, as well as hosting the first FEI Nations Cup™ Final in 1991. 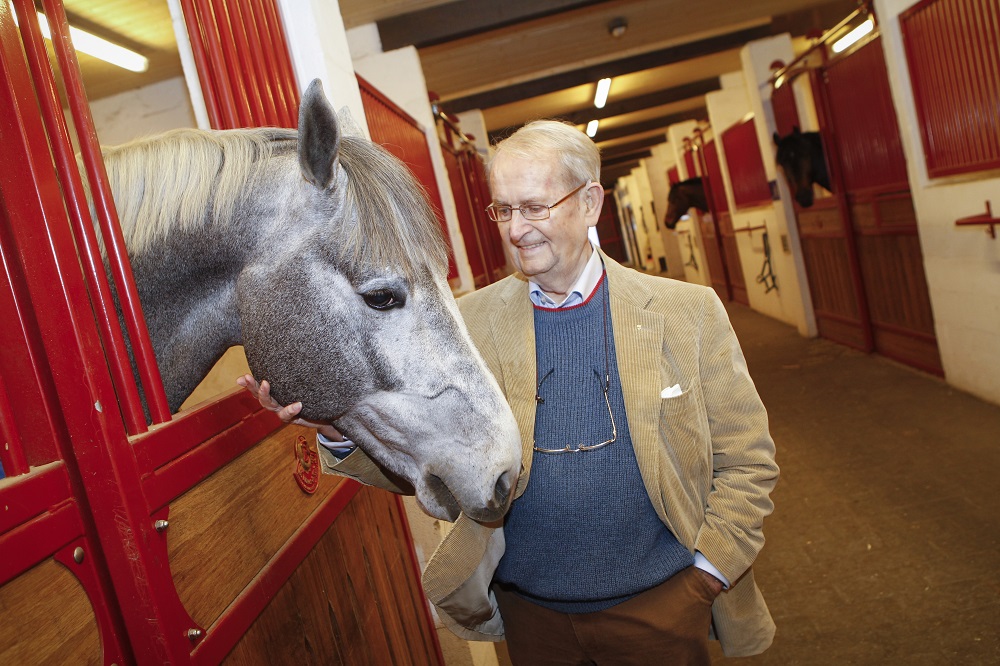 Leon Melchior, founder of the world-renowed Zangersheide Stud, who has passed away at the age of 88. (FEI/Dirk Caremans)Zangersheide – Lanaken 2011
© Hippo Foto – Dirk Caremans

Johan Heins, who was based at Zangersheide for many years, always said that Leon Melchior’s greatest achievement was improving the quality of horses competing in the sport of Jumping through his legendary breeding programme. One of the best known horses bred by Leon Melchior was the mare Ratina Z, which Germany’s Ludger Beerbaum rode to individual gold at the Barcelona Olympic Games in 1992.

Leon Melchior was made an Officer in the Order of Leopold, a Belgian national honorary order. He also received the Maastricht Medal of Merit, and was a freeman of the town of Lanaken. He was also founder of 53 different companies.

Zangersheide and the production of sport horses were his two greatest passions which he enjoyed until the last weeks before his death. His incredible legacy will continue on into the future through his daughter, Judy-Ann, a member of the Belgian Jumping team who will keep the Melchior name to the fore in the equestrian world for many years to come.

“The world of show jumping and horse breeding, has lost one of its greatest friends and most generous supporters with the passing away of Leon Melchior”, FEI President Ingmar de Vos said.

“He was the first promoter that put together the world of sport and breeding with the creation of the FEI World Breeding Championships for Young Horses Jumping at Zangersheide. These prestigious championships identify the best young Jumping horses, and the titles have had a very high value from the beginning more than two decades ago. With the Sires of the World, he created a global stage for the best stallions to display their talents.

“Leon was a true visionary and innovator, and his passing leaves a tremendous void in our lives that will be difficult to fill. He was a very close personal friend. I will miss him dearly and my heart is with his family.”

The FEI expresses its sincere condolences to Leon Melchior’s family, his many friends, the Belgian Equestrian Federation and the global Jumping community.

Melchior’s funeral will take place at Domain Zangersheide in Lanaken on Tuesday, 17 November.